Three of the biggest windfarms in South Africa are situated in the Kouga – at Jeffreys Bay, St Francis Bay and Oyster Bay.

The output of a wind turbine is strongly influenced by the speed of the prevailing winds in the area. These sites are situated in one of the country’s windiest regions, and will generate approximately 300 million KWh per year – enough to supply approximately 50 000 average households with electricity. Each turbine is capable of generating up to 2.5MW of power.

Interesting height and weight statistics are:

By its very nature, wind varies and does not blow consistently all the time. This is why the site of the wind turbines is so important; erecting them in an area with prevailing winds ensures that the turbines can generate energy and provide energy to the grid about 90% of the time. The wind turbine only cuts in (starts operating) when wind speed reaches approximately 13km/h. 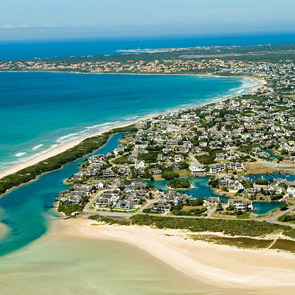